“It’s not a typo,” my friend stated, although it’s hard to believe how a name such as Eggslut became such a tasty recommendation in LA.

I’ve heard the hype surrounding the small breakfast/lunch stall inside the Grand Central Market, and after many “I’ll check it out one day” thoughts, I finally cracked and made it happen.

I totally understand what all the jabbering is about.

Open from 8am to 4pm daily, Eggslut is on the Broadway side of the food market with herds of hungry people fighting for a seat at the bar. Though there are many delicious-looking options, I went for the $9 ‘Slut,’ described as a coddled egg on top of a smooth potato purée, poached in a glass jar and served with toasty crostini, and a bottle of their $4 raw orange juice (produced by the Press Brothers Juicery in the stall directly across from Eggslut!). The perfectly poached organic egg, sprinkled with sea salt and finely chopped chives, is perfect to scoop on top of the toasty crostini served on the side. 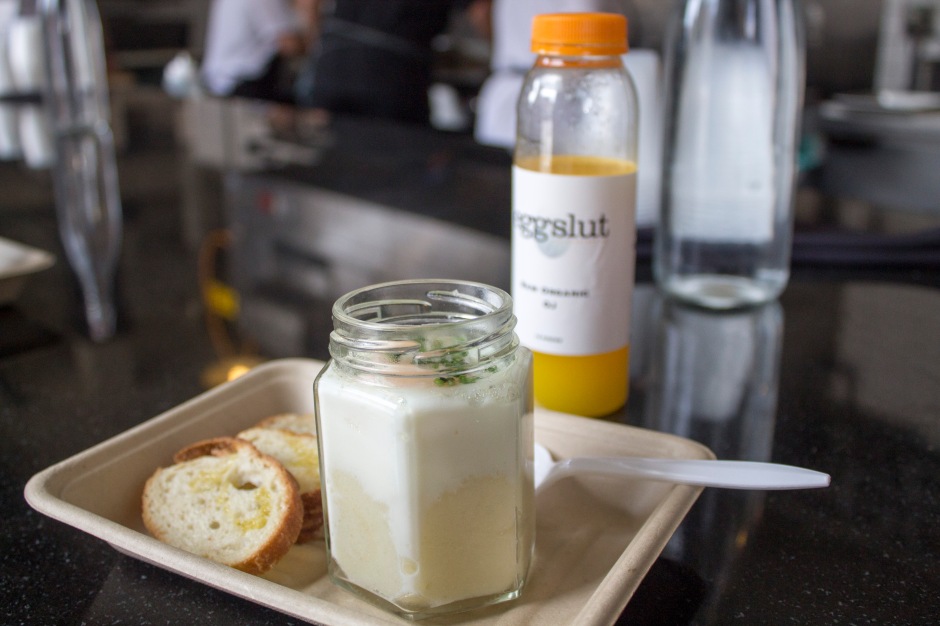 If you’re super hungry, then I’d suggest going for one of their more heartier items, such as an organic egg sandwich served on a fresh-baked brioche bun, starting at $7. However, the Slut is the perfect portion to leave not-so-stuffed, and to have room to sample other cuisines available at the Grand Central Market. Isn’t that what food markets are all about?!

317 S. Broadway
Los Angeles, CA 90013
Inside Grand Central Market
Stall D-1 (on the Broadway side of the market)

5 Comments on Eggslut- The Perfect Breakfast in LA