Below the opulent streets of Paris, under the patisseries and boulangeries and beneath the couture boutiques lay a stretch of winding mazes filled with the decay of human life.

Les Carrieres de Paris, or the quarries of Paris, are a series of subterranean tunnels built-in the Roman-era, that were used for limestone extraction. Once depleted, the quarries were used by farmers to grow mushrooms, concerts were held underground, refuge for members of the French resistant during WWII and also underground bunkers were established for German soldiers in these dark tunnels. Needless to say, these tunnels have been used and abused, but nothing as awesome as what would come next can top its final use.

You see, back in 1786, most burials were done without coffins. Unless you were rich, chances were your dead, limp body would be tossed in a large communal mass grave. Once full, a new layer of dirt would be added and then before you knew it, more bodies were added and so on….. The surrounding soil of the Les Halles district, once a sought after place by churches for final resting places, was like a giant 15 layer cake of bodies, and the frosting was disease.

Saturated with rotting hominids, the Les Halles district experienced a major health crisis due to disease-spreading into water wells and the surrounding soil. The limestone in the soil below stimulated the rotting flesh, making the outbreak that much worse. Cemeteries within the city limits were condemned and bodies were exhumed.

The baron quarries were chosen to be the new home to the dead. Priests blessed the tunnels before beginning to inter them into the maze of passages, and moving of the bodies was done at night. In the beginning, the bodies were simply piled in no order in the giant “underground warehouse”, until 1810 when it was decided to revamp the spot. Skulls and bones were artfully arranged, some places being all skulls, others femur bones and so on, with the final sepulcher being in 1860.

L’Ossuaire Municipal, also known as The Catacombs or Les Catacombes, is about 180+ miles of tunnels under both the left and right bank arrondissements, housing somewhere around 7 million deceased. Entrance into the tunnels without an escort is illegal, however there are secret entrances throughout Paris that many people sneak into. These crazy beings, known as cataphiles, sometimes party underground, and if you look closely (especially during early morning hours) you can find them oozing out of hidden entrances, manholes or sewers, escaping the police especially assigned to patrolling the mazes.

While many people complain they can’t find the entrance or that it is hard to find, I personally have no idea what they are talking about. While there aren’t huge signs promoting the joint, it’s not that hard to get there. Lines form early and quick; my advice is if you want to go, get your buns up early and get there or else you can potentially stand in a 2+ hour line. It opens at 10am, so get there at 9:30 and you’ll be golden. There’s an allowance of 200 people in the tunnels at all times, with an estimated 45min-2 hours to complete, so lines can move super slow. There’s no bathroom. Obviously, this is an underground burial site, so double-think that venti coffee you’re about to inhale before descending to the underworld. And by descending, I mean the 130 steps you will walk straight down and the long corridors of never-ending halls you will then walk down until you get to the dead people. Also, there’s no place to store your belongings. If you’re entering with five bags full of Louis Vuittons or duffel bags filled with Eiffel Tower key chains for your friends back home, you’re stuck schlepping it all with you for the next couple hours.

The entrance is straight off the Denfert-Rocheau Metro stop. From the street, it is a small building with no signs of what’s below. You enter and begin your journey…

It’s ridiculously dark in the entire Catacombes, and no flash photography is allowed. But curiosity combined with my defiance made me mostly use my flash, especially in creepy dark crevices such as this….

These gated areas found throughout the path of the Catacombes freaked me out. I was almost waiting for something to lunge through the bars and attack me…. There are so many unexplored areas underground and this is one of them…

Thankfully I took after my father’s side of the family; I’m practically a midget at a staggering 5’1, perfect for that the ceilings get pretty low at this point in the ‘Combes… I’m guessing Yao Ming hasn’t visited this place. 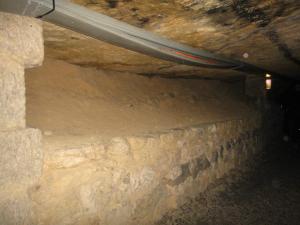 After walking forrrrrrrrrrever down the tunnel, you finally see some cool sculptures made from the rocks, built to honor a worker that was killed when part of the tunnels collapsed. To this day, construction in Paris is monitored very closely due to the large underworld below.

You will walk down an absurd amount of tunnels that smell of mold and death…. 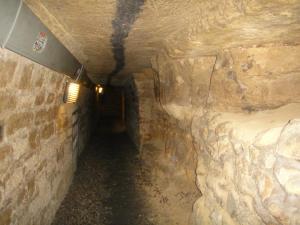 All areas of the Catacombes are stamped with dates. These dates show when that specific area was built, such as this one

You will come to an area of light; an area with new designed tunnels… 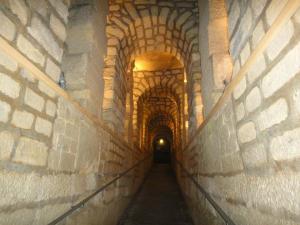 In this area, a water well can be observed. This was built for easier access to the underground water supply… it’s very “Goonies-like”…

After more tunnels, you will reach a room that contains some interesting historical facts and photos of the building of the Catacombes (where I learned oh-so-much about this fantastic place). My favorite of the pics is this one: a real photo of the exhumed bodies waiting to be interred into their new home… (yikes!)…

The entrance to the good stuff! After walking for quite some time, you reach this sign…

Now, it would have been nice if there were some sort of notice or advice to NOT wear sandals into the Catacombes. Like right about here, there should have been a notice posted that says “Hey, you! Yeah, you! The idiot in open-toe sandals! You’re an ass… and you will certainly accidentally step in puddles of water that have accumulated on the dirt ground from the ceiling above that are constantly dripping water. And you know what’s really great about that, ass in sandals?? The water is in a pool of human bones. You’re about to have dead people between your toes….”

But of course there is no such warning for asses whom wear sandals….. 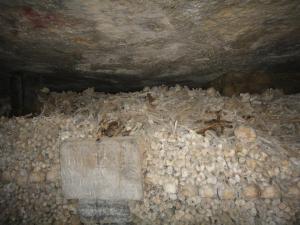 Visiting Les Catacombes is an awakening yet humbling experience. It is thought that maybe, just perhaps, the remains of Marie Antoinette herself are among the bones of expired lives, crystallizing beneath the grounds of a bustling metropolis. These spiritless shells of existence tell the history of Paris-past one skull and femur at a time.

9 Comments on Halt! This is the Empire of Death: Les Catacombes